I wanted to make this post because, for a lack of better wording, I need to.
So, can we get real with each other for just a minute? Or maybe a few…

I’m 29 years old.  I’m a Virgo.  I was born in a small city in Alberta, Canada.  I was raised as a country girl living in the city, and so, I love country music.  Well, I love quite a few genres of music really.  I love to sing, even though I may not excel at it sometimes.  I was a competitive dancer for 16 years, and I still love to dance just as much now.  I love sketching and drawing.  I love painting.  Hiking and spending as much of my time in the mountains as possible brings a smile to my face.  I love animals, and will probably get more excited to see your dog than I will to see you (lol).  I love theatre, both stage and film.  I love fashion, and the creativity and fun that it brings.

I’m a dreamer.  I’m a giver.  I’m an empath.  I’m a granddaughter, a daughter, a girlfriend, a friend.  I’m clinically Depressed, Manic Depressive and nursing a newborn Anxiety baby. …And nothing else that I told you, or didn’t tell you, about myself matters as soon as I mention my mental illness…because once it’s said, it’s all you’ll see.

I know, I know.  I know what you’re thinking, because I get it all the time.  Why do I mention my mental illness then if I don’t want people to know about it?  Why bring focus to it if it doesn’t define who I am?  The simple answer is because people will know about it, regardless of if I come right out and say it, and as much as I want to tell myself that my mental illness doesn’t define me – it does; in that moment of suffering, of fighting, of dealing, it defines every millisecond.  And that’s OKAY, but we need to get more comfortable with talking about it.  With listening.  With understanding.

Living with mental illness is not something I can hide – or at least not hide very well.   It’s incredibly frustrating when you’re dealing with a whole tonne of stuff that you just don’t know how to explain… sometimes you just don’t even want to try to explain it.

I’ve been having a rough go of it lately – a slump, if you will.  A lot of things have happened in my life, it just seems like one thing after another after another, and so in these moments I’ve been taking notes.  I’ve been trying to put into layman’s terms exactly what I’m going through when I’m going through it, or how I’m feeling while I’m feeling it.  I’ve made notes, and I’m writing them out on this public platform because I’m tired.

I’m tired of being misjudged and misunderstood.
I’m tired of being forgotten because I’ve been labelled the unreliable friend.
I’m tired of having no explanation to give for those who ask.
I’m just tired – literally – all the time; what I fight against every day feels like it’s constantly sucking the life out of me (think Dementors from Harry Potter).

I hate living with mental illness, and here’s 30 reasons why:

1) It’s living in a prison; it’s like having the whole world in front of you, but your mind keeping you chained to the spot you’re standing in.

2) It’s feeling so lost that you can’t concentrate.  Your mind wanders, and before you know it hours have gone by and you’re left feeling wasted and useless.

3) It’s locking yourself in your bedroom on a gorgeous day because you’ve just had enough – of people, of stimulation, of thinking and of not being able to think.

It’s eating pizza curled up in bed, washed down by the tears that are streaming out of your eyes.

4) It’s screaming to yourself more times than you can count: WHY CAN’T I JUST BE NORMAL?!

5) It’s being cast as constantly over-emotional or crazy, in the production I never auditioned for in the first place.

6) It’s like being stuck with a roommate that you can’t stand, yet not being able to catch them in their wrong-doings to have any leverage for evicting them.

7) It’s collapsing into bed the minute you walk in the door, shoes and coat still on, because you don’t have the energy to remove them.  It’s wanting to hide from the world as fast as you possibly can, even if that means having to clean the dirt off of your bedsheets later. 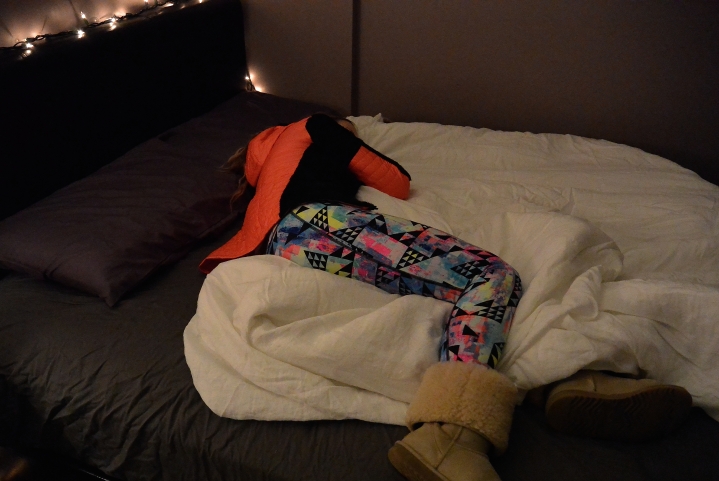 9) It’s feeling like absolutely no one else in the world relates to you, or could possibly understand what you’re going through.   It’s exhausting, to the point where there are days that I wish I could sleep for weeks on end.

10) It’s feeling everything all at once, and yet feeling absolutely nothing at all.  Feeling so numb that you don’t even notice your ribs moving in and out as you breathe… wait, are you even breathing anymore?

11) It’s driving and not realizing how you got from Point A to Point B.

12) It’s losing control of the grip you’re convinced you have, and bringing disappointment to others.  It’s having those mistakes follow you like shadows, constantly lurking – though only you can see them.  It’s embarrassing yourself when you break down in front of others because you SHOULD have had this under control.

13) It’s being unmedicated and feeling like a chaotic version of yourself that leaves nothing but destruction in your wake.  It’s being medicated and hating every part of it because it’s left you as an empty shell of yourself; a void simply taking up space.  It’s going off of your meds because you’ve convinced yourself (and your doctor) that “You got this” , and then greeting the panic and self-loathing that knock on your door when you feel yourself losing control again.  So, it’s going back on your meds, only to get upset that you can’t ACTUALLY get upset about how it once again has left you feeling like you’ve been devoured by The Nothing… so you decide to go back off of your meds and try alternatives.  Repeat this cycle for infinity.

14) It’s knowing that if you had a broken bone, or a surgical procedure, that people would be there to comfort you, to check in on you, to surround you with love.  It’s knowing that when they find out your ailments are caused by your mental illness you’ll be surrounded by blame, contempt and apathy.  It’s wishing that you could break a bone, or have an internal organ removed instead.

15) It’s looking forward to your favourite fitness class (and getting out of the house) because it always cheers you up – yet getting there and hating every single moment of it because you feel like everything you’re going through is tattooed onto your skin, and everyone is looking at you – and they KNOW.   It’s leaving, piling into your vehicle a crumpled mess of tears, and driving home feeling more defeated than ever.

16) It’s having one, two, three, four bad days in a row.  It’s feeling incredibly guilty for even having ONE bad day, especially if there’s nothing in your life to be upset about.  When bad things do happen, it’s feeling like your world is going to implode because they somehow have come in more than 3’s (HELLO! DON’T YOU KNOW THAT RULE, MR. LUCK?)… they pile up, and threaten to bury you alive.

17) It’s spending a lot of your time alone.  It’s longing for friendships that bring adventure, laughter and memories…but it’s avoiding old friends, and new, because you’re “too much to handle”.

18) It’s being irrationally resentful and jealous of the people around you because how the hell do they have it all together?!

19) It’s wishing you had someone to talk to, but also hoping that no one will talk to you because then it saves you having to try to explain everything.

20) It’s knowing the triggers of your “fight or flight” mechanism better than you know your favourite film, and knowing that you’re gonna choose flight, every time.

21) It’s praying that someone doesn’t ask when you’ve realized that they’ve realized something is wrong.  It’s wanting but not wanting to have that conversation because how can someone else understand it when you don’t even have a grasp on it yourself?  How do you explain to someone the overwhelming sadness that crushes you like a vice for NO REASON WHATSOEVER?!

22) It’s wishing people would take you seriously, including (and especially) the medical professionals who are supposed to be there to help you.  I mean, you KNOW it’s bad when even they think you’re crazy, too.

23) It’s constantly being accused of seeking attention, when you’re actually asking for help.

24) It’s faking your happiness on social media, and in real life, to save yourself the judgement of being “that person”.

25) It’s soap in your eyes because you start crying in the shower as you’re washing your face.

26) It’s your late-night drives transitioning from your sanctuary and joy to your breakdown central.  It’s your steering wheel becoming your shoulder to cry on, since you cry more behind it than anything else these days.

27) It’s wishing you could bring your dog with you everywhere you go, because she seems to be the only one that keeps you level-headed and calm in your moments of ruin.  She gets you, and 90% of the time it feels like she’s the only one who ever will.

28) It’s laughing one minute, and crying the next – as if someone has flipped a switch in a cruel game.

29) It’s basically just crying, all the time, and committing yourself to the fact that you’re a walking contradiction.

30) It’s dealing with ALL of these things… every. single. day.

…but it’s not weakness.  It’s unpredictable, ugly f*cking strength. Every single part of it takes a level of courage you don’t think you have.  Self-realization. Talking to someone – a friend, a parent, a colleague, a professional.  Staring at the monster in the mirror that only you can see, and having to make the conscious choice every day to fight against it for your freedom; to say, “I’m not going to let you win. NOT TODAY, SATAN.”

It’s the moments that you overcome the demons that you fight; the moments of victory, however fleeting they may be, that get you through one day and onto the next.

It’s knowing, that at the end of the day, you’re a warrior and you’ll get through it – come hell or high water – because you’ve already survived 100% of your bad days.

It’s knowing that no matter how alone you feel, you never truly are.

2 thoughts on “Can We Get Real For A Minute?”