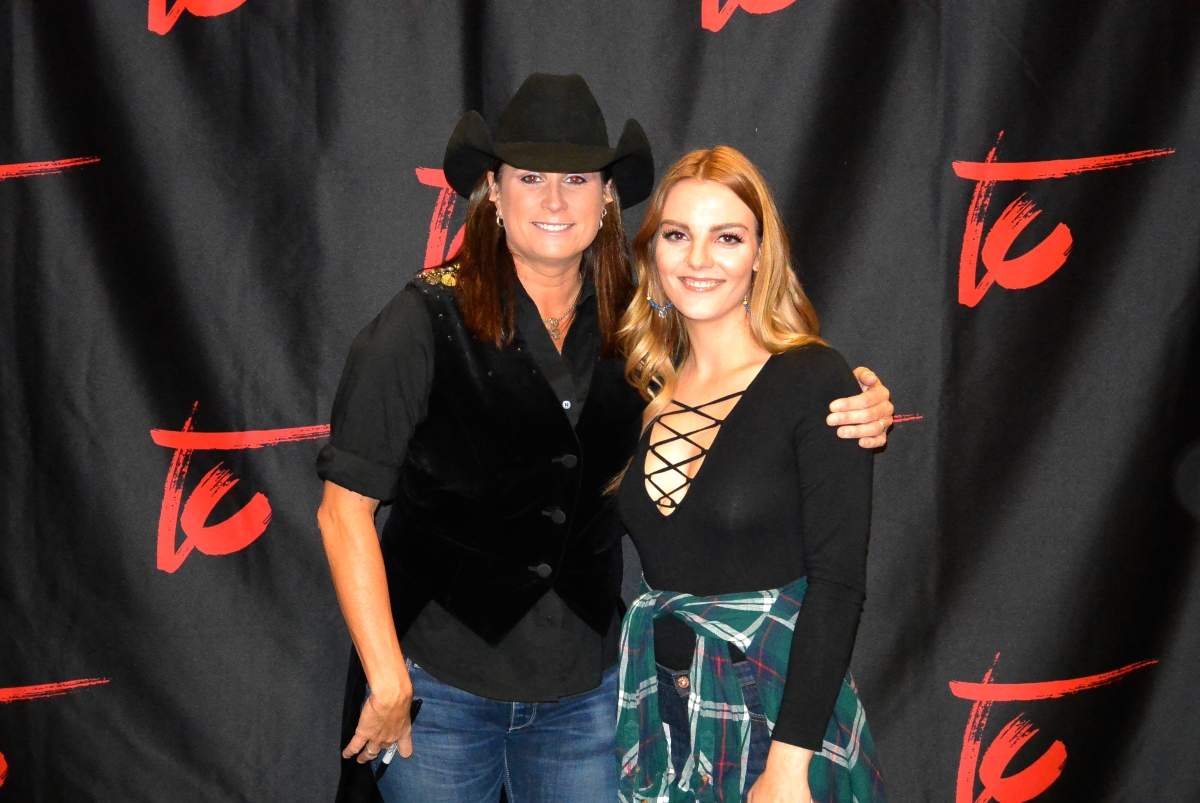 I’m just going to start this off by saying that I had the BEST NIGHT EVER last night.

Disclaimer: This post is going to be regarding Terri Clark’s Back to My Roots solo acoustic tour…what I thought, how I felt, what I experienced, what I wore – you know, basically everything there is in the hand basket. 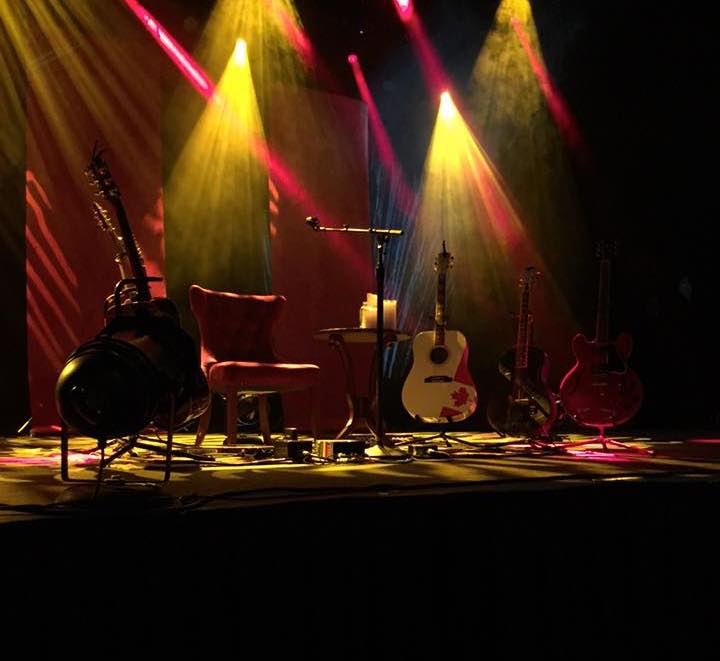 Last night was a great night.  I (as mentioned above) attended Terri Clark’s Back to My Roots solo acoustic tour – and it was honestly everything I thought it would be, and more.

My evening started off a little hectic. I was running late, rushing to get ready after work.  I had requested Meet and Greet passes, and was confirmed for them, so I was as stressed as a balloon in a vice that I wouldn’t get there in time.  I still had to travel to Calgary, find my way to the casino, AND find parking.  Luckily, we made it! *phew*

Meet and Greets are always so fun, yet I always feel like I mess them up just by being my socially awkward self.  THE PRESSURE.

This time, I was determined as ever to have it go smoothly.  For the 20 minutes I had before I went into that little room, I went over and over and OVER what I was going to say in my head.  As I got nearer and nearer to the meeting point, I started sweating more profusely (thank God I remembered deodorant), though I was still (shakily) confident that our exchange would go as planned….until it didn’t. LOL *sigh* As I walked up to greet her, the ladies behind me caught her eye (they obviously knew one another) and her excitement (sweet as it was, bless her heart) TOTALLY threw me off my game; everything I had planned to say disappeared from my mind like someone had hit Control-A-Delete.  And, just as I’d feared, my socially awkward self came rearing forward to take control of the situation, and it ended in a pretty hilarious, yet cringe-worthy (on my end) exchange. 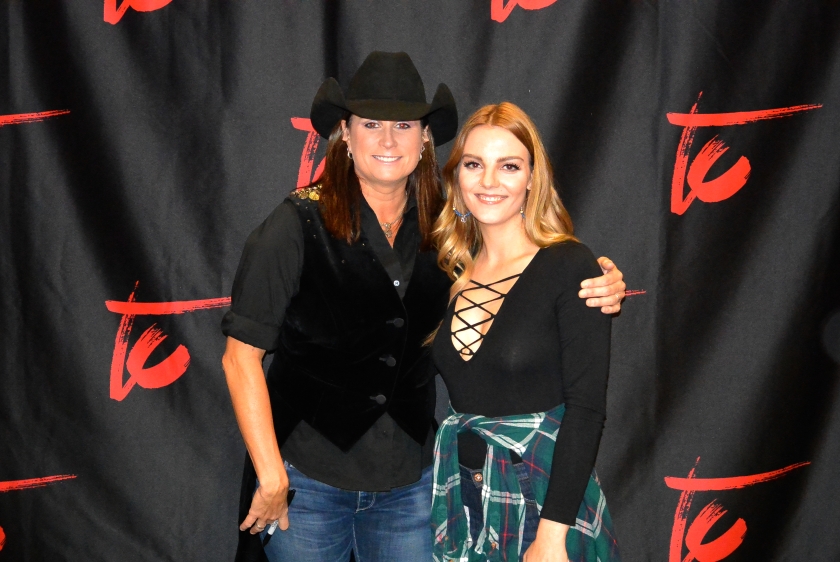 PS – I wanted to tell you that your vest game is A++ lately, but you know, social anxiety…!

After completely embarrassing myself once again, I was happy to go and find my seat so I could immerse myself in the music and forget all about how badly I need to work on my social cues.   I have to say, I’m pretty sure I ended up with one of the best seats in the house.  Front row, almost centre.  It don’t get better than that!

Now, I’ve been to a few of Terri Clark’s shows before, and they’re always a good time.  She’s an enormously talented entertainer, both in song and in story…however, this particular show seemed different – in a great way.  As it’s a solo acoustic tour, which means there’s no band and no fancy travelling along with her, it had an air of magic about it.  Maybe it’s just me, but I felt like last night we got to experience the truest Terri behind the Award-Winning persona. It was hard NOT to have fun right along with her; the joy she was experiencing just radiated off the stage and into the audience like a mist.  She, of course, sang her songs – as singers usually do (I was so happy to hear so many classics in the mix!), she made some beats (whilst we talked amongst ourselves), she had us all splitting a gut with her story telling (particularly in reference to those majestic Rocky Mountains), and I was both mesmerized and ready to spill out of my chair in laughter when she presented us with her John Anderson covers.

She touched us all by including “Smile” in her set list once again.  Though she gracefully, and beautifully, sang her way through it, I can’t say the same for the rest of us.  I’m not sure there was a dry eye in the house…and I couldn’t help but have been brought back to when Ms. Clark played at the Westerner Days in Red Deer in 2012.  “Smile” was on the set list then, too, and I remember thinking, as she sang her heart out with tears streaming down her cheeks, “Now THAT is strength, grace and love.”

The night seemed to just fly…had it gone on until the wee hours of the morning, I would not have had a care in the world – even though I still had to travel home and work the next day.  I didn’t get many photos, in part because I don’t want to be that annoying person who blocks the view with my phone the entire time, but also (and more importantly) I was just enjoying myself far too much, and remaining too firmly in the present to pay much mind to anything else other than what was unfolding in front of me.

I’ve been fortunate enough to see many concerts in my time so far, and I know I’ve probably said it before, but real talk: this show truly, genuinely, was the greatest show I’ve ever attended.   It was raw, and it felt more like a giant get-together with your closest friends.  Terri is SO funny, so goofy, and charming as hell.  She’s a genuine soul, who delivers the whole authentic package, and who is so humble that I don’t even think her reflection acknowledges her fame.   When asked what the best part of being a celebrity was, her response was simply, “I’m a celebrity?” … I mean, COME ON.  If that doesn’t make you smile…

I’ve been a fan of Terri Clark’s for as long as I can remember…and I’ll remain a fan of hers until I’m old and grey and can’t remember anything anymore.

My advice to you is this:
if you love good, home-grown country, you need to snag yourself some tickets to this tour.
If you’re a TC fan already, then you’ll walk away an even bigger fan.
If you’re not, you definitely will be post show.

(and also, what is wrong with you?! How are you not already a fan?!) 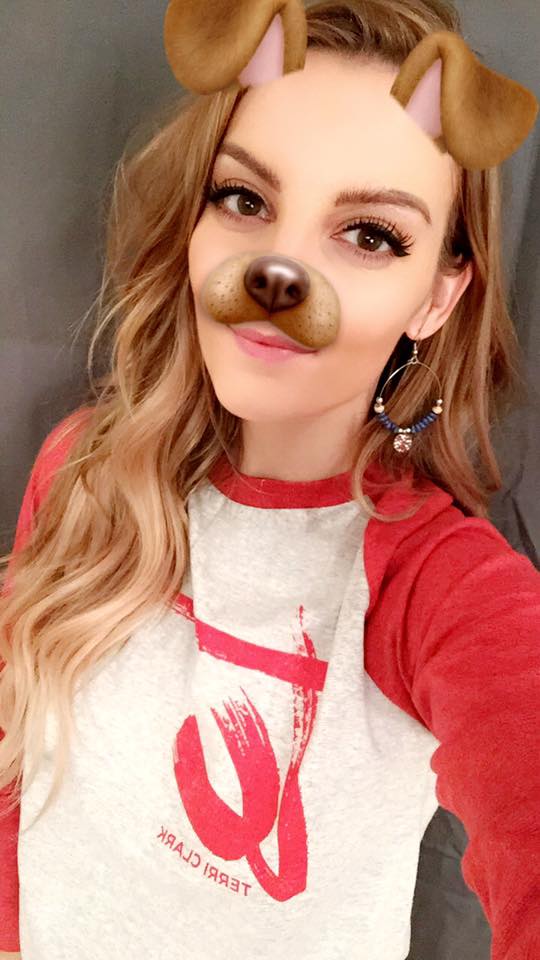 Flashback Moment – I’ll never, ever, forget my very first M&G with Terri. I was 12, and I was obsessed with the colour green, as I recall.  I literally wore a green turtleneck, with lime green eyeshadow packed onto my lids like icing on a cake, and my khaki green nylon purse from Wal-Mart.  When I found out that I had to go in alone (my mom didn’t have a pass) I was so scared that I almost didn’t even go.  I remember as I walked into the room and up to shake Terri’s hand (she must have smelled my fear), she immediately opened up with the warmest of hello’s and complimented profusely my lovely purse from Wally World.  I was just this awkward little kid who didn’t know much what to say, but that experience has stayed with me all these years, and still puts a smile on my face 🙂 (Now if only I could find that old photo…)

Now, as promised, what I wore:

(Please excuse the wrinkles in the backdrop.  I don’t have a steamer and I wasn’t expecting to use it so soon! I’m such a professional… haha!  But hey, I never promised or claimed to have my poop in a group.  Please don’t judge me.) 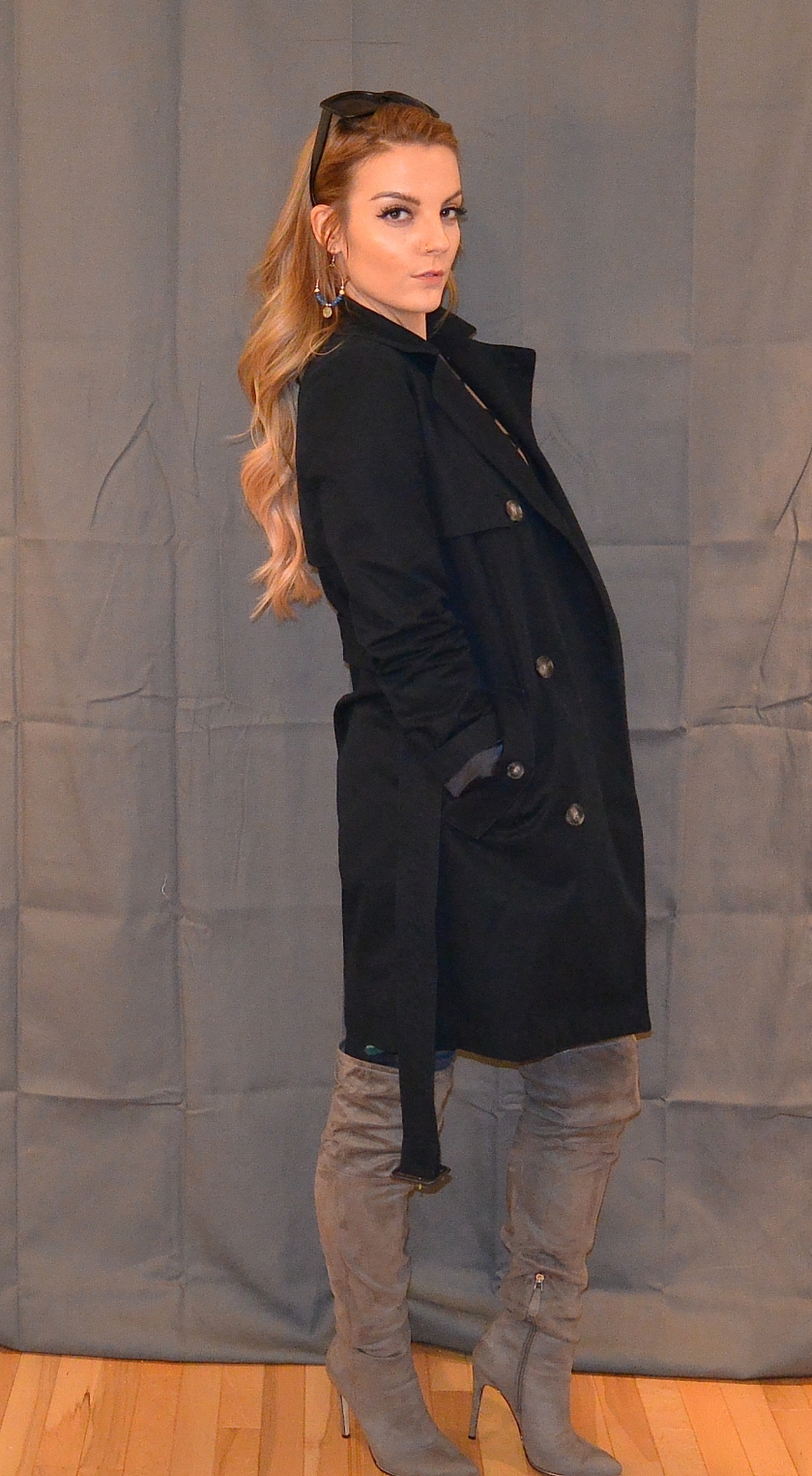 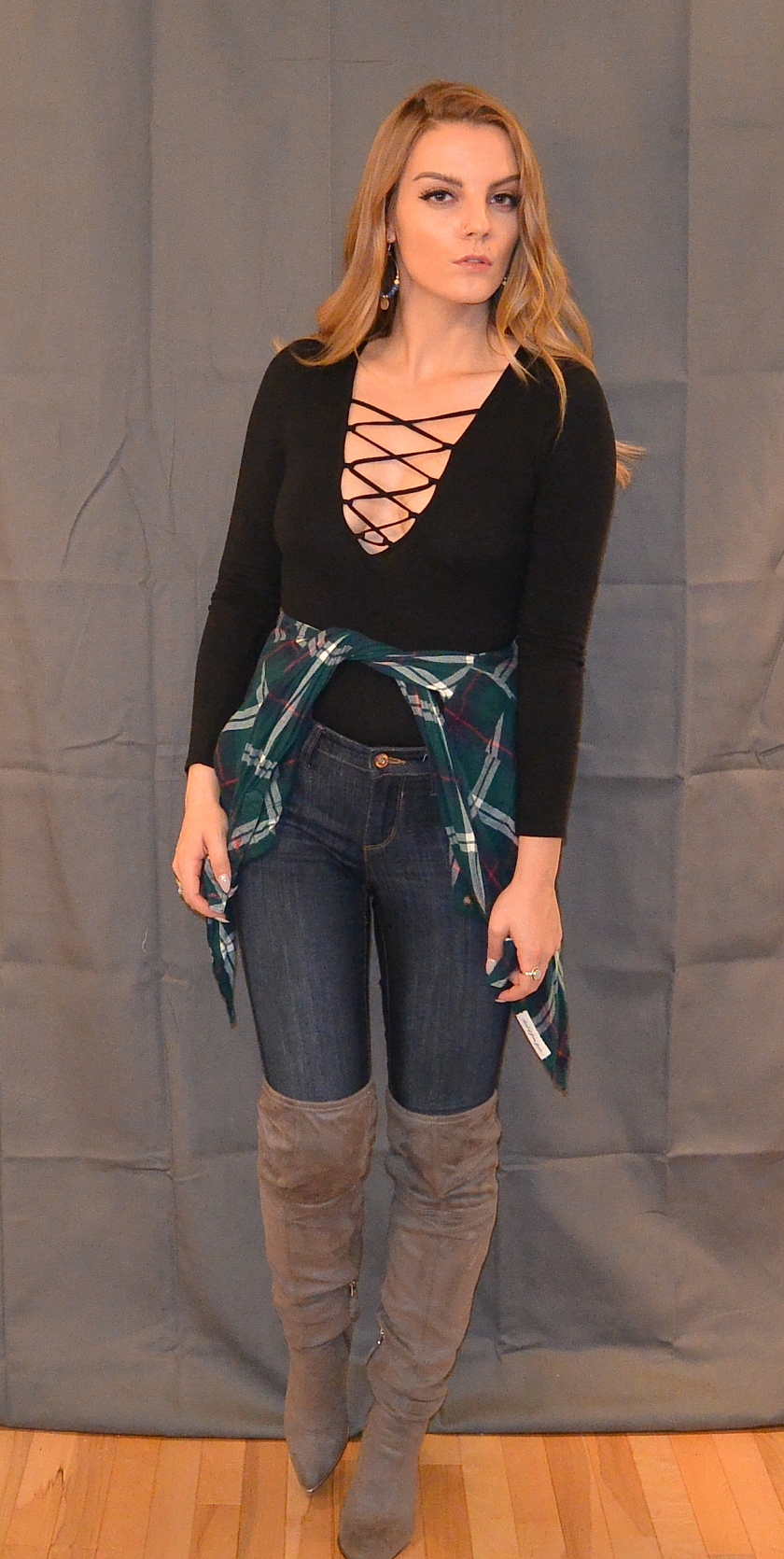 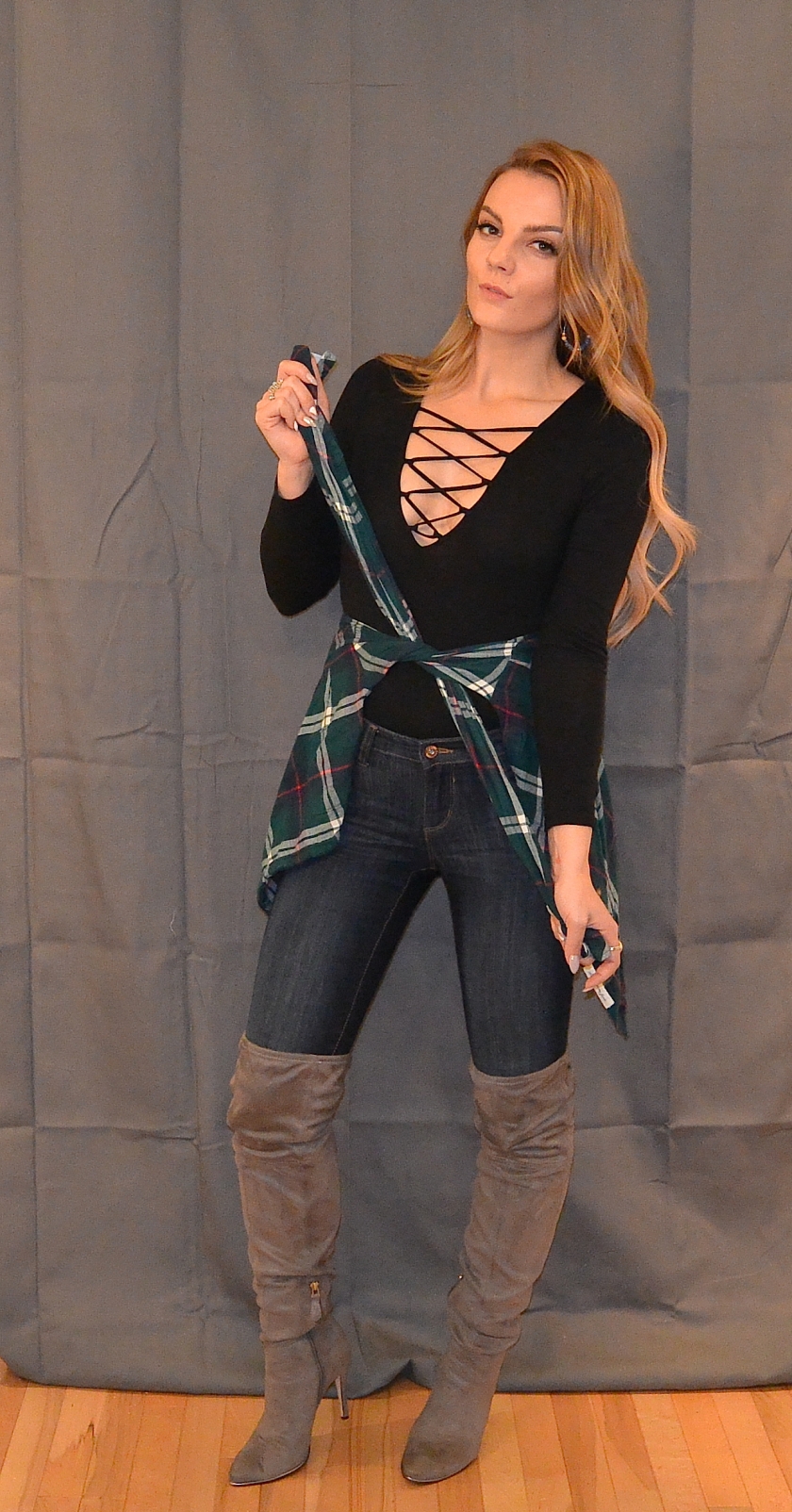 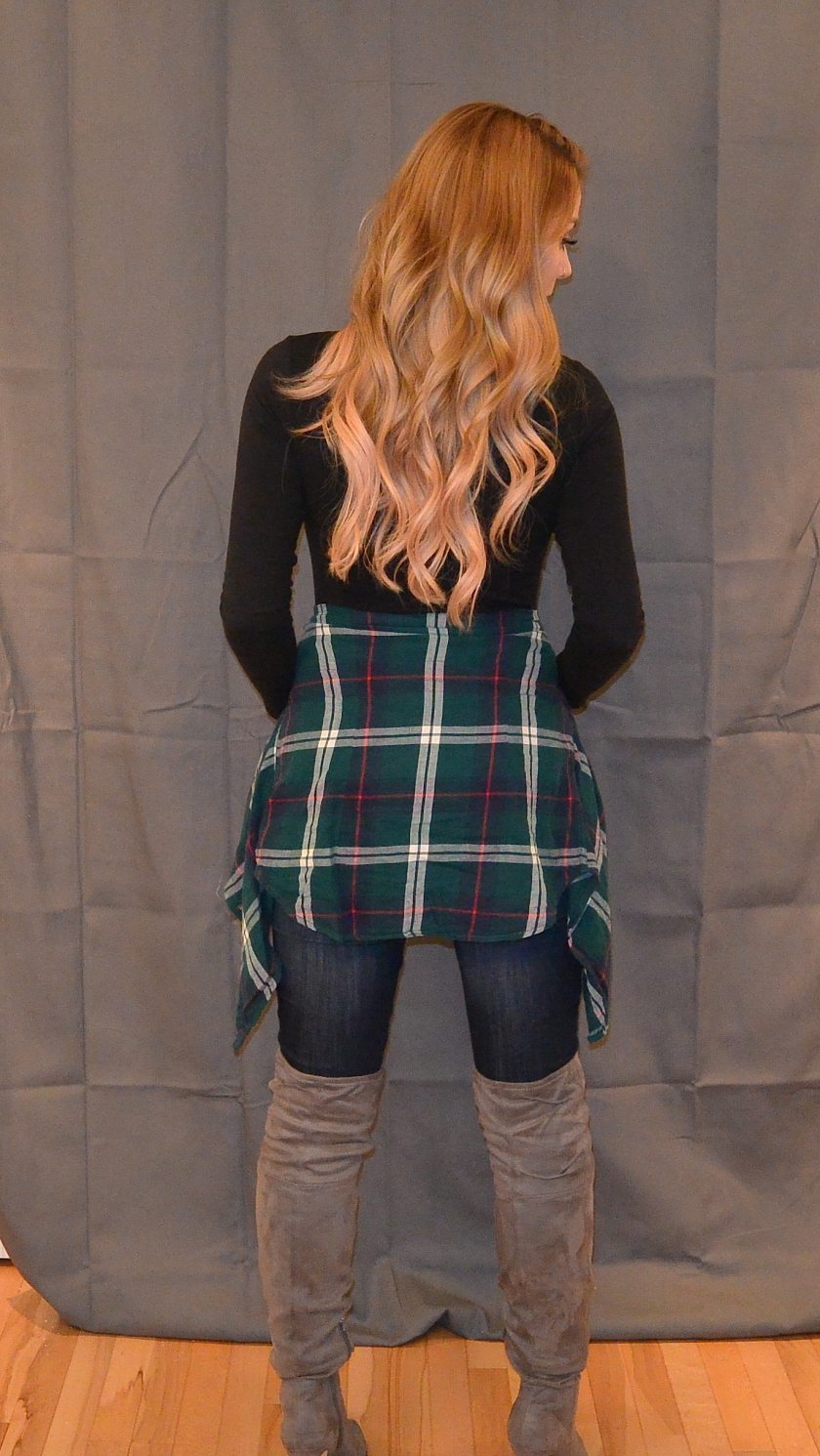 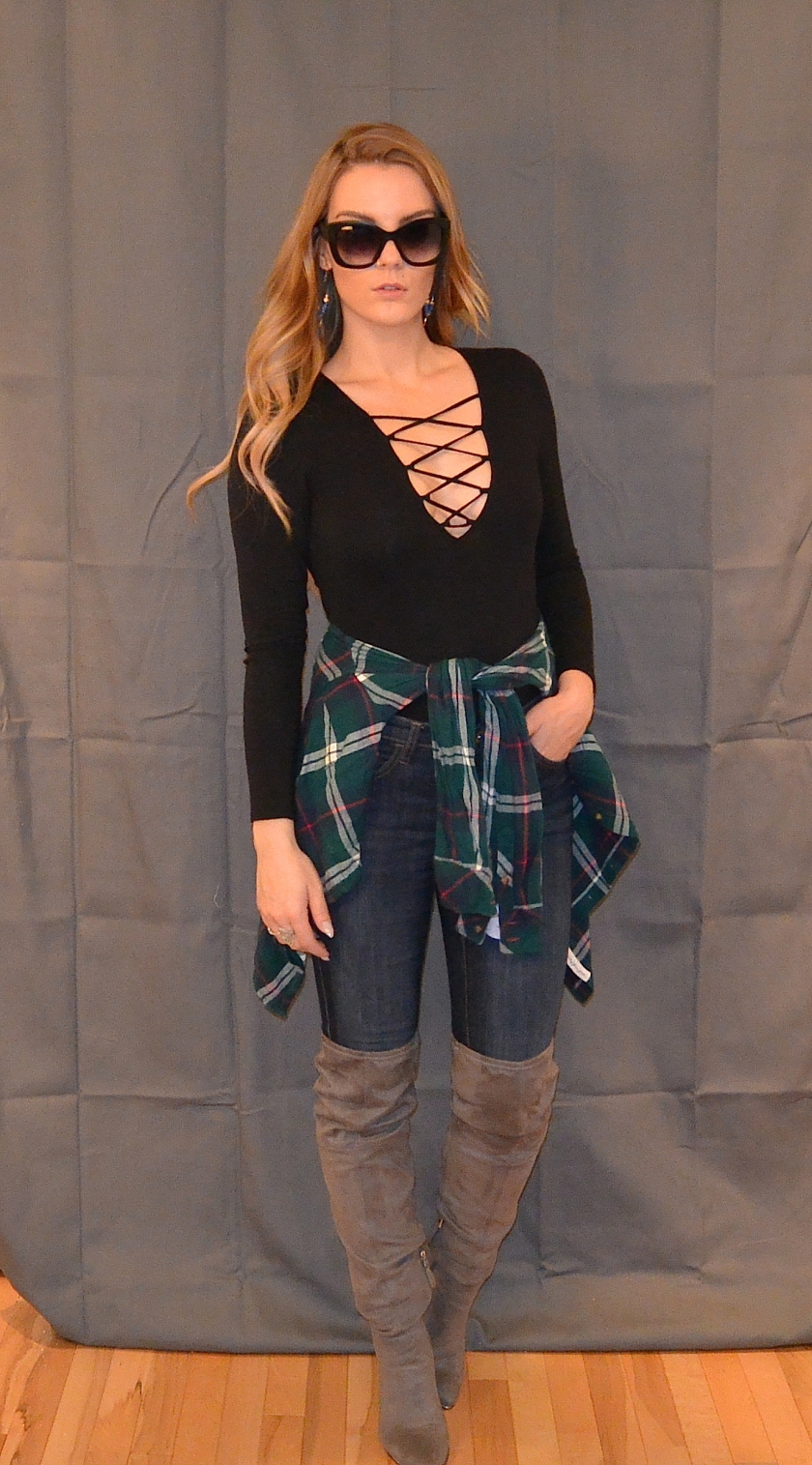 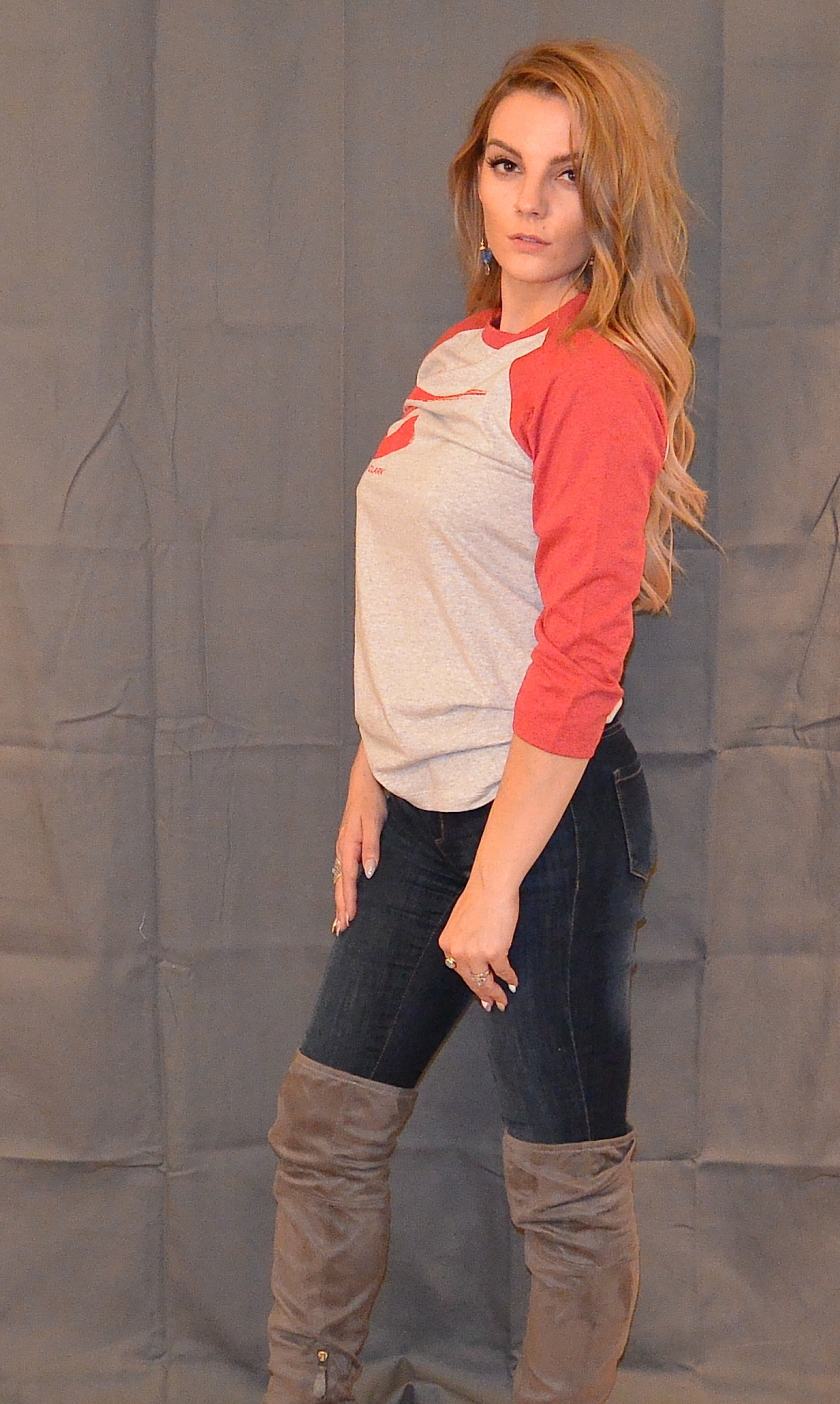 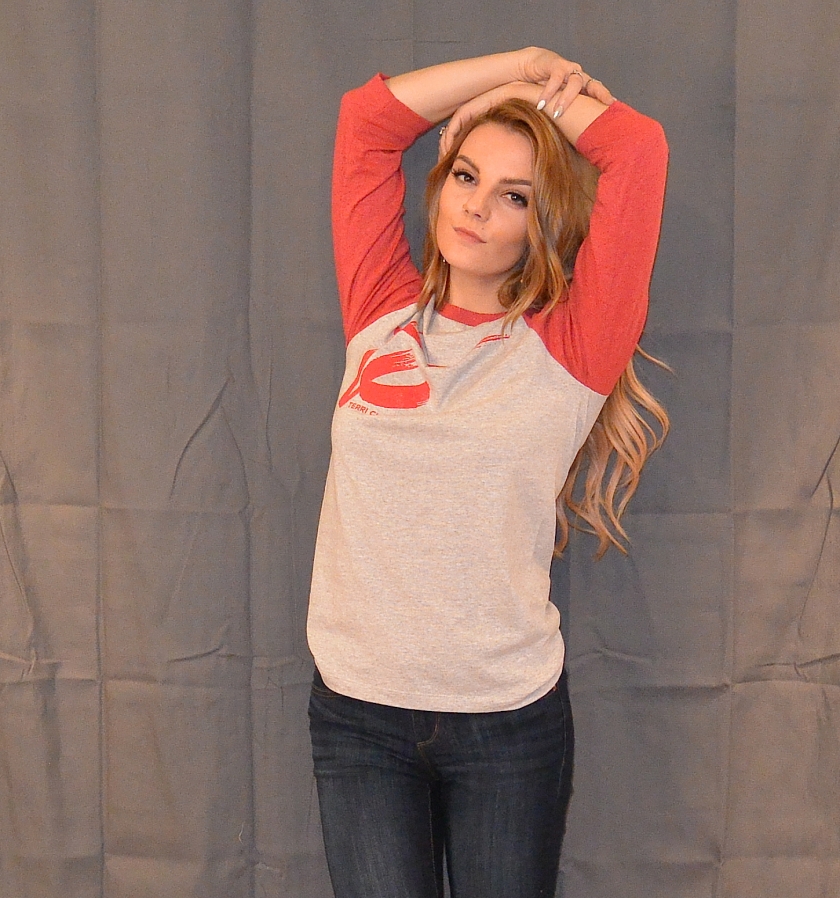 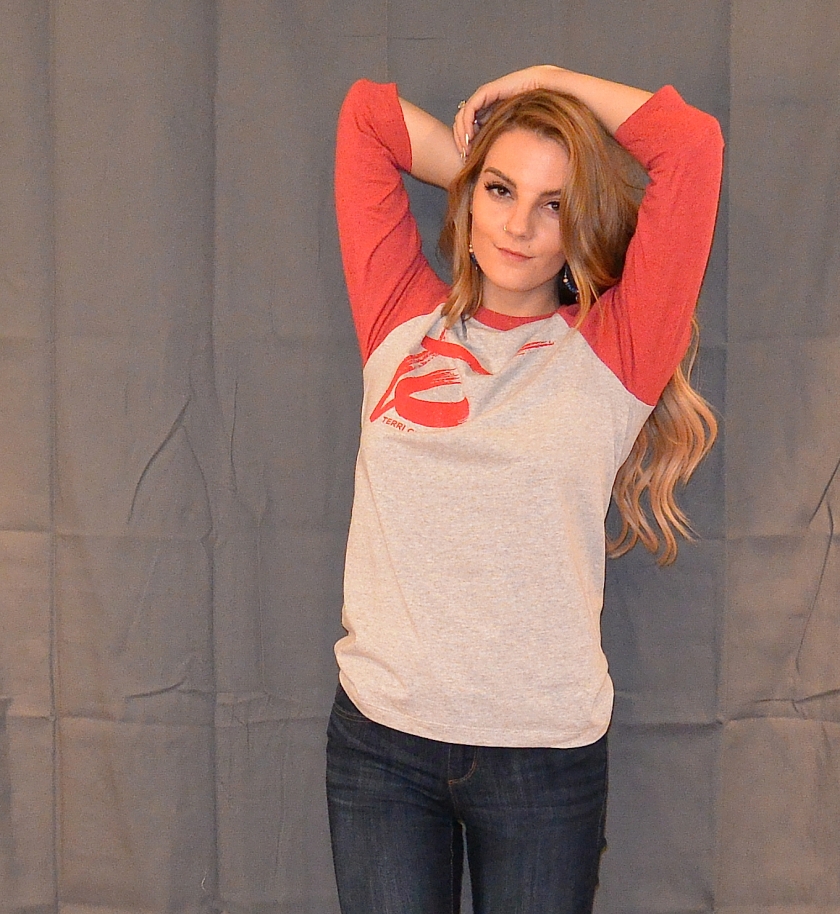 BTW: This Raglan Tee is available here if you want one 🙂 It’s SO COMFY.